I’ve just brought home a Sun Ultra 45 workstation that my company disposed of. These are the specs:

Unfortunately I didn’t get the matching Sun LCD monitor since there was no reason for the company to get rid of it. It works just fine on our current Windows machines. 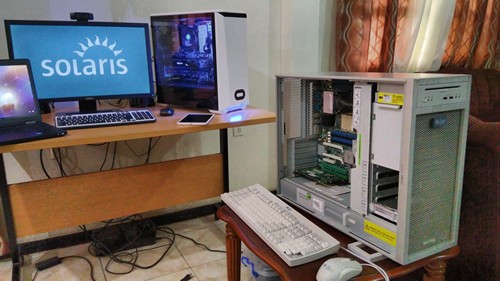 When I first powered on the system it filled the screen from margin to margin, top to bottom with the error “FATAL: no exception”. I was delighted! After sitting in storage for about 12 years, it powered on fine and give display output. Whatever was wrong with it I was confident I could work around.

Once I got home I opened it up to find that the inside is remarkably dust free. It doesn’t even have a perceptible smell. It’s in quite good condition. Nevertheless, one by one, I removed, dusted and re-seated the memory, graphics card and hard drive.

That did it! On next boot, I got the OpenBoot screen displaying the XVR-100 graphics logo and system specs and the ok prompt. At this point the system proceeded to boot from disk:a automatically. I took care to check that there were no errors about an invalid PROM and the system’s network MAC address looked normal – both good signs that the internal battery was healthy.

Unfortunately the system never completed booting up. It seemed to hang at the error “WARNING: Timed out waiting for NIS to come up”

NIS or Network Information Service is a name service and centralized authentication service that was popular on UNIX (and some Linux) systems in the mid 90’s. Think of NIS as a combination of today’s DNS (for naming) and LDAP (for authentication) services. The system most likely hung because it isn’t connected to the network environment it’s configured for. So off to Google I went and came up with this link in short order where someone outlined exactly how to get around the error.

I should reboot into single user mode and manually disable NIS, then reboot into multi-user mode. So I tried just that.

I got stopped in my tracks however, when I realized I didn’t have the root account password to login in single user mode. So another quick sojourn to Google produced root password recovery instructions that involve booting from a Solaris installation DVD. So I’m currently burning that DVD. I’ll update this as soon as I know if i’m ultimately successful getting the system to boot up normally. 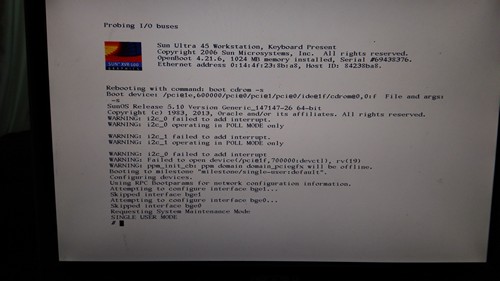 It’s a few days later and I have no good news. I did get single user mode booted from a Solaris 10 u11 installation DVD. But as I was trying to mount the hard disk and remove the root password the system shut down unexpectedly. And it hasn’t booted up again since. I’ve tried the only trick I currently have which is re-seating everything that’s removable. But no luck.